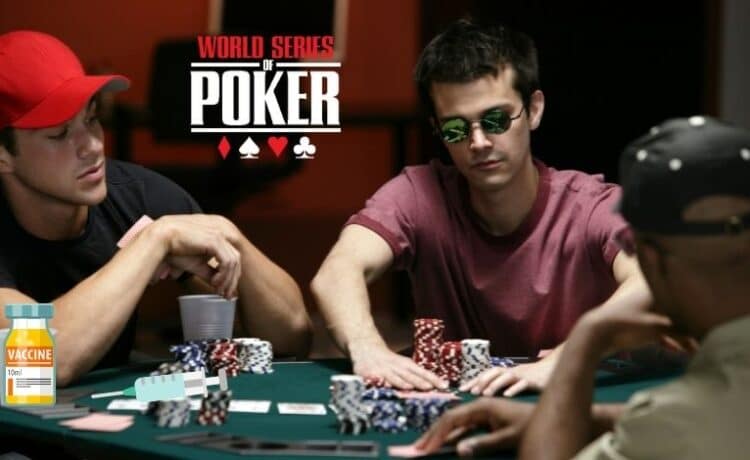 The 2021 World Series of Poker is set to start in five weeks at Las Vegas and the announcement by the organizers that everyone involved with the event must show proof of Covid -19 vaccination, has created a stir. Participants, staff, vendors, and even media, all must produce proof of vaccination, using a mobile health app, according to the Series Policy.

The poker community seems to be divided over this announcement. While many players tweeted their happiness over this decision, many feel it is not right to impose this mandate. Those who are for it lauded the organizers for keeping players’ safety as their prime objective. Those who are against it feel this is an impingement of their freedom of choice. Significant among the opposers are the well-known couple in the world of poker- Alex Foxen and Kristen Bicknell. Both have decided to boycott the series which is a loss to the tournament since Bicknell is a three-time bracelet winner, and Foxen is running for Player of the Year awards in several categories.

Chris Moneymaker, 2003 WSOP main event champion, had initially announced that he would not participate, but now with the vaccine mandate, he feels it is safe enough to play. He feels WSOP being a private set-up, they have the right to make rules for the tournament. Again, Joe Cada, 2009 WSOP main event champion and four-time bracelet winner, has decided to stay in Michigan rather than getting vaccinated and going to Las Vegas. The poker world stays divided as of now over this mandate. It is interesting to note that those approving the decision are more than those opposed to it. According to a poll conducted by Card Player, 41.1 % responded that they are more likely to play while 22.1% said they were less likely to play if they need to follow this clause.

It remains to be seen how this will finally affect the attendance at Las Vegas. International players, as it is, have to wrestle with travel restrictions. Moreover, the competition is in fall rather than summer. Social Media, especially Twitter is abuzz with reactions from both sides. There are even jokes doing the rounds.

The organizers are pretty sure of their decision. SOP Executive Director, Ty Stewart, is reported to have said that the game of poker involves players being close to each other for extended hours, hence this is a precautionary measure to keep everyone safe. They are following norms previously followed by other organizers such as Life is Beautiful Musical concert organizers, NFL Raiders Game organizers, and Electric Daisy Carnival organizers.