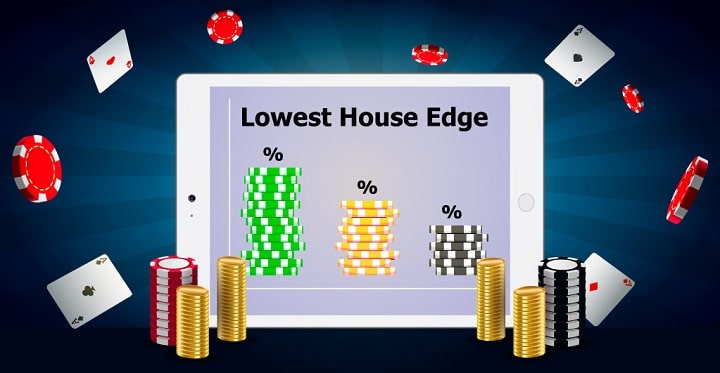 Have you ever wondered how casinos make huge profits? Is it only because the players lose in any casinos game? Maybe not, and here is where the concept of House Edge comes in and may be, for this reason, the House Edge in a casino is also termed as “casino advantage.” All casinos have this built-in gaming advantage that works in favor of the respective casinos. House Edge exists in all gambling sports, be it tables, slot machines, lotto, or in both online or land-based casinos. But what is a house edge, and what are the various casino games with the lowest house edge.

What Is the House Edge?

Casinos offer unlimited entertainment to players, but it is also true that they keep aside a handsome amount of profits for the casino owners. This is to be remembered that the casinos do not beat the players because they are lucky every time, but they can beat the players because the odds are stacked in their (casino’s) favor, which is defined by “house edge.” The casino advantage or the house edge is the product of the casino games themselves and are not set by the casinos. Therefore, no matter which casino game you are betting on, you cannot expect to escape the casino’s house edge. The house edge is represented as a percentage reflecting the advantage that a particular betting sport has over the player.

Games at the casino with a high strategy pays out less on average over time compared to those with a low house edge strategy. With this knowledge, players can easily avoid those games at a casino that give more advantages to the casino operators than the players. Here are some of the lowest house edge games at casino discussed in details below:

Blackjack is a game where both judgement and knowledge yield. Therefore, it is very important for the players to know the game tactics and strategies to reap the benefits of a lower house edge. Otherwise, your inexperience may lead to losing the Blackjack game. Blackjack generally has a low house edge strategy of 0.5%, which is considered normal as opposed to most others that have a higher house edge.

The basic strategy to win the blackjack game is to download blackjack charts, which are available in plenty online. With these Blackjack charts, players would easily identify every possible outcome for the cards that both the players and the dealers hold.

Craps are considered the second-best game casino. The higher the odds allowed, the lower will be the house edge because, in a craps game, there is no house edge for odds. The house edge in craps varies from nothing at all to a whopping 13.9%. The best bets at the craps table are Don’t Pass and Don’t Come, and both closely mirror. Then pass come the ‘Pass Line’ and “Pass Don’t” which are also very popular (known as don’t pass as well). ‘Pass Don’t Come’ bets work similarly to the Don’t Pass bets, but they are available after the ‘Pass Come’ bet is established. However, there is always a debate among players who bet on ‘Pass Come’ or Pass Don’t Come or Don’t Pass or Pass Don’t or Don’t Come bets (most prefer pass don’t come).

Baccarat is much of a high-profile game as it involves higher stakes than putting off the low-limit players. The house edge of this game is as low as 1.01%, which is again an advantage to the players who can easily earn 100% RTP on their wagers if played strategically.

The three-card poker game is played against the dealer using 3-cards hands. In this game, three independent bets can be placed, namely Ante, Pair-Plus, and 6-Card Bonus. The first one or the Ante bet is compulsory, whereas the next two bets are optional. The house edge in the Three Card Poker game is 3.37% on the Ante variant and 7.28% on the Pairplus variant.

Video poker is generally played on consoles at land casinos or can also be played virtually online. Here players don’t have to go against each other around a table; instead, it is just the players and the machine. There are hundreds of progressive and multi-hand video pokers available that offer unique pay tables and various house edges. Depending on the pay tables, one video poker game may be better than the other, and also, all casinos do not offer the same video poker games.

Slots are the most popular casino game having a house edge that can range up to 10%. Slot casino games allow players to make hundreds of spins that can easily add to their advantage. The basic strategy to win a slot is to choose the old reel-style for $1 or higher to cut the casino advantage by at least 50%.

Pai Gow Poker game is the upgraded version of the traditional Chinese Pai Gow card game. It is played with a standard 52-card deck and a single joker on a table set with six players and the dealer. Each player tries to defeat the banker, who may either be the casino dealer or one of the fellow players on the poker table, or even a player who is acting as a co-banker. The house edge for a Pai Gow Poker is 2.84%, of which 1.27% comes from those players who lose a tie to the bank, and the remaining comes from the 5% commission that is paid on the winning hands.

Last but not least, Backgammon is one of the oldest board games ever known to gambling enthusiasts. It is a 2-player game where each gamer has 15 pieces (checkers/men) of his color that move between 24 triangles (points) according to the roll of 2 dice. The initial positioning of checkers is like two on each player’s 24 points, five on each player’s 13 points, three on each player’s 8 points, and five on each player’s 6 points. Both players will have their pair of dice along with a dice cup for shaking. The house edge of Backgammon ranges from 4.82% to 6.39%.

However, with the best gambling tactics, the house edge can be effectively turned to the player’s advantage, but due to the random nature of the games, long term profit cannot be guaranteed. But players can always give it a try to marginalize house edge in games like video poker or craps. The best thing that a gambler can do to marginalize the house edge and turn it in his favor is to accept that the odds are stacked against him and wait until the realization sets in. Once it is done, the layers can concentrate on the main game.

Games like Slot machines and Keno have a higher house edge, but at the same time, these games offer sizable payouts to the customers to ensure that they come back again. Slot games have repeatedly proved this, as, despite a house edge that ranges from 2% to 15%, the slot game is still one of the largest revenue generators at casinos.

What Game Has the Best Odds?

The Blackjack has the best odds in casinos with a house edge of 1% in most of the casinos.

What Game Has the Worst Odds?

The Keno game had the worst odds with a house edge that can extend from 20% to 40%, thereby putting off most players who have explicit knowledge of probability and house edges.

What Is the House Edge in the Casino War?